Are banks 40% worse than in February?

Everyone’s wondering how the banks will fare as we inevitably head into a coronavirus driven recession. We have seen all 4 of the major banks’ share prices decline more heavily than the broader market and the Australian Prudential Regulatory Authority (APRA) issued a gentle reminder that bank executives consider “prudently reducing or suspending executive bonuses and dividends until the scale of the recession is clearer.” FYI – there is nothing gentle about an APRA reminder.

So, is the 40% reduction in the “big 4” share prices an overreaction or do the banks really face a torrid time ahead?

It raises a lot of questions…

1. Why did APRA feel the need to intervene?

2. When is the outlook likely to be “clearer” (as APRA says)?

3. Will the banks cut dividends as APRA wishes?

4. After studying the banks loan books, what could be the extent of lending losses in a recession and how would this affect shareholders? 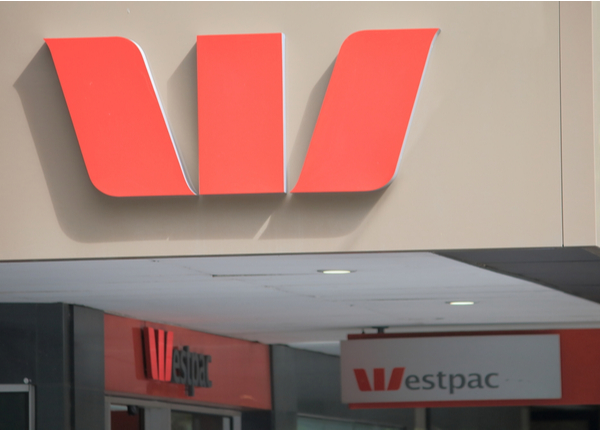 1) Why did APRA feel the need to intervene?

First, a history lesson. The Global Financial Crisis was a co-ordinated collapse in the financial system and resulted in governments bailing out banks. In the US and Europe this was to the tune of trillions of dollars. Basel 3 International banking standards were introduced to ensure this is unlikely to happen again. Basel is a town in Switzerland home to the Basel Committee for Banking Supervision and the bank for international settlements.

The most important requirement of the Basel 3 accord (2009) is to do with capital requirements or specifically, the common equity tier 1 (CET1) ratio. CET1 is a measure of a bank’s financial strength and ability to absorb unexpected loss. In the accord it was resolved by the 28 member countries to maintain a CET1 ratio greater than 4.5%, up from 2% in Basel 2. The current CET1 ratios of the Australian big 4 banks are:

These ratios meant the big 4 banks were rated “unquestionably strong”. So why did APRA intervene? Simple – it’s to do with the P in APRA. APRA’s objectives are very different to those of the banks. It doesn’t care much about shareholder returns and even less about management’s bonuses. It cares that the banks continue to provide a stable credit environment and, above all, the Australian government never has to pay out on its guarantee of retail term deposits. APRA has said it would like the banks to remain “unquestionably strong” by creating a huge safety margin.

So, is it overkill? Given APRA can’t be ignored, from a shareholder perspective it is probably also best to act now and be prudent for the following reasons:

1. It’s possible (but unlikely) banks may need the extra capital because of higher lending losses.

2. If they wait for evidence of elevated losses, the share prices may be slightly lower making it harder to raise capital. Better to shore up capital now by suspending or cancelling dividends.

3. If they end up not needing the extra capital, they can simply pay it out later as special dividends.

2) When is the outlook likely to be clearer?

Perhaps this question should be “When is the outlook likely to be clearer in APRA’s eyes?”
It’s fair to say APRA will be cautious, so it may be a while after everyone else (including the stock market) feels the outlook is clearer. This may mean more than one dividend cycle.

3) Will the banks cut dividends as APRA wishes?

We already know the answer is yes. APRA is colloquially known as “the iron fist in the velvet glove”. Could you imagine the foolish bank CEO that snubbed their nose at the regulator, paid dividends and executive bonuses then later asked for some support, however small? Ouch. None of the banks are that silly even if their treasury department says they can easily pay dividends.

4) After studying the banks loan books, what could be the extent of lending losses in a recession and how would this affect shareholders?

Our economist Tim Farrelly conducted a stress test on the banks by modelling a GFC event and a 5 times GFC event. There are 3 main areas of losses for the big banks: Residential, Developer and Business lending. The results are in the table above and summarised below. 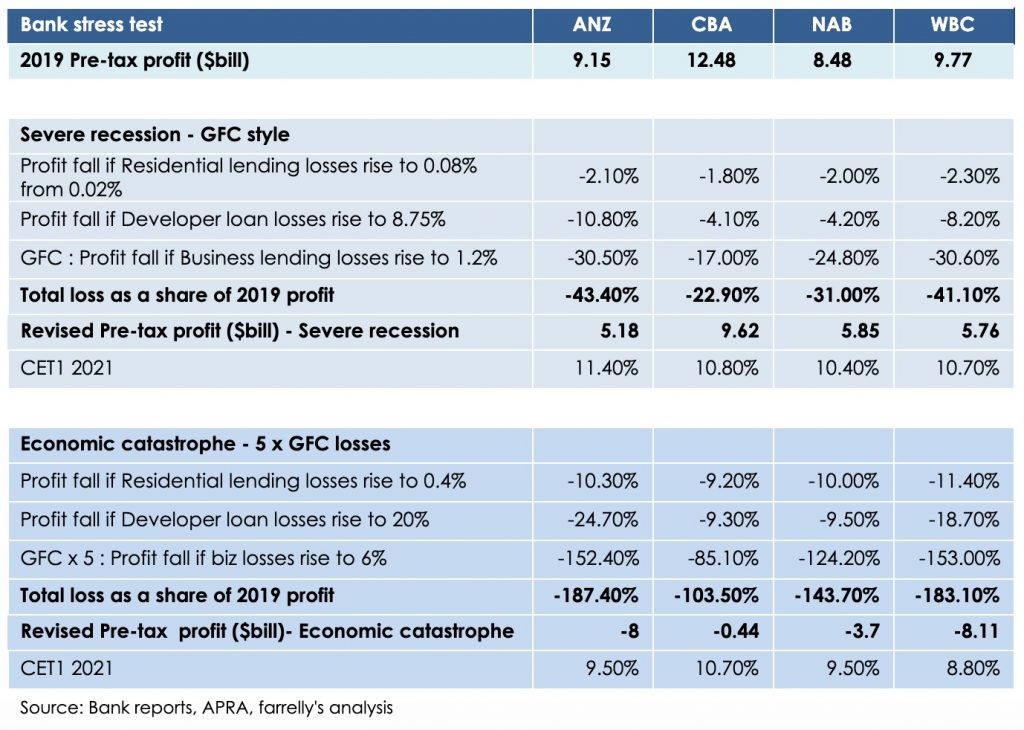 GFC losses – Banks profits drop between 22.9% (CBA) and 43.4% (ANZ). Not ideal but certainly doesn’t justify share price drops in the magnitude we’ve seen.
5 x GFC losses – Profit falls between 103.5% (CBA) and 187.4% (ANZ). This would result in capital impairment but not drive CET1 ratios dangerously low -nowhere near Basel 3 limits as shown below.

Recessions are sometimes tough for bank profits (ask anyone around in the early 1990’s), but even in a severe coronavirus recession there are a couple of reasons to be optimistic the banks will remain strong:

After earnings downgrades (loan impairment provisions) are factored in, the big 4 are trading on Price Earnings ratios below the rest of the market (a sign they are “cheap”). It’s true the near term is uncertain but we believe the market is too focussed on it. The near term dividends will be cut or suspended so that’s a consideration for highly income dependent clients – however we’re convinced banks are not 40% lesser companies than they were 10 weeks ago.

If you have any questions or if you’d like to speak with an adviser, please contact our team today. Read more Financial Industry articles.